Congratulations to those behind School of Everything which had its official launch yesterday from Channel 4’s headquarters in Horseferry Road, London. 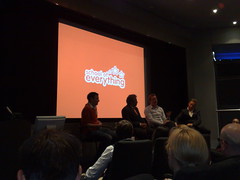 It’s a little like a dating agency, though I’m not sure whether they’ve considered speed-learning evenings yet.

Anyone can sign up for free to learn or teach. As of last night, there were some 1200 teachers registered.

Amongst the things that people want to learn, popular subjects include music, languages, driving and yoga.

The business model is likened to ebay’s – a small cut is taken by School of Everything each time a learner pays a teacher.

It’s a stunning idea, and it’s great that (erstwhile BBC colleague) Matt Locke at Channel 4 had the foresight to back it.

There certainly was an eclectic crowd at the launch, it was great to chat with and meet some of the team and the advisory board.

Tags: learning, school of everything, teaching