The following from my Dad made me chuckle, especially the inscription: 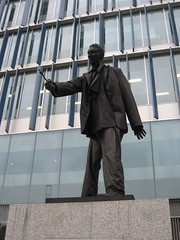 As we were approaching Tate Modern from Southwark Street a couple of weeks ago we came across a curious statue in Sumner Street.

The larger than life-size grey figure wears clothes that flutter in the wind and is mounted on a plinth bearing no name but a very hard to read Latin inscription which reads: “Quid quid latine dictum sit, altum videtur”.

Intrigued I did some researching on the internet.

The statue turns out to be animatronic. It reacts to and imitates the people around it and will create its own poses if left alone.

The inscription, as Latin scholars will already have worked out, means “Anything said in Latin sounds profound”.

Further information about the statue here