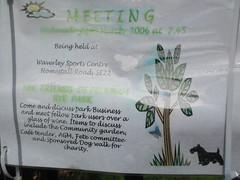 I saw this sign yesterday on the gate in to Peckham Rye Park opposite the Herne Tavern.

A meeting which happened last Wednesday included discussion of a café tender for Peckham Rye Park.

According to this Southwark Council document:

1. That the £60,000 allocated within the Environment and Leisure capital strategy 2004/07 for the construction of a new café for Peckham Rye Park be approved for release.

2. Peckham Rye Park is one of the Borough’s four major parks and has undergone a complete restoration following the award of a £2.5 million grant from the Heritage Lottery Fund. This work will be completed in July 2005.

3. As part of the grant giving process, the Heritage Lottery Fund considered the funding of a new café for the site, but this option was rejected by the HLF Trustees.

4. The need for a café on the site has been identified and is a key performance indicator for the delivery of the best Value Review of Parks (2001). The construction of a café is supported by the Friends of Peckham Rye Park and the wider community.

5. At the Executive Committee meeting of February 2005, Members agreed to allocate a further £60,000 to this project as part of the Environment and Leisure Capital Strategy 2005-08. This sum was in addition to the budget of £300,000 that had been approved by Members in February 2004.

6. Peckham Rye Park is a Grade II listed landscape. However, the site of the proposed café is within Peckham Rye common, outside of the area of the listing. Full consultation will be carried out with English Heritage in respect of the proposed site and design and its possible impact on the listed park.

Care will be taken when developing the scheme to ensure its successful integration into an important landscape. The design of the building will be informed by a sustainable approach in order to minimise its environmental impact and maximise its effectiveness within the public realm.

7. Full planning permission for the development will be required and Peckham Rye is designated MOL in the Borough’s UDP. Officers will propose that this development is ancillary to the use of the open space and thus permitted within the context of this designation.

8. The construction of this facility will enhance the recreational activities that the park currently offers. Thus the proposed development will support the following corporate priorities.

Effect of proposed changes on those affected

9. An Equalities Impact assessment pre-assessment has been carried out and it has been determined that a full EIA is not required in respect of this report. See Appendix B.

11. The project will be procured in accordance with the Council’s Contract Standing Orders and with regard to the Council’s Procurement Guidelines process, with a minimum of 5 external competitive tenders being obtained.

12. A full consultation process is underway in respect of the development of the design for the building. This includes the following:

Release of the money will allow the progressing of the capital works proposed by this report and thus assist with delivery of the Council’s objectives in the manner set out in the report. The report indicates the intention to comply with the Council’s Contract Standing Orders and to have regard to the Council’s Procurement Guidelines. There are no other legal implications.